Gone to Blazes and Back 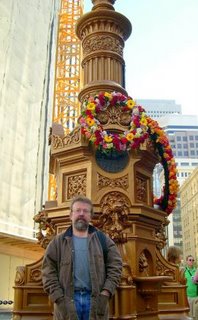 If you do a lot of traveling, as I’ve done, you find that there are certain places in the world where you feel more at home than normal. Pull up a chair, grab a cold one, and settle in for the rest of your days. Maybe we’re so comfortable in these locales because we lived there in some previous life. I don’t know. But in any case, I’ve found a few such spots of my own over the years: Jamaica; Sydney, Australia; and San Francisco. My relationship with that latter city began in the early 1970s, during a family vacation in Northern California, when our Volvo station wagon suddenly broke down one evening at the busy intersection of Powell and Post streets, right on edge of Union Square, downtown. The horns honking, the people yelling, the streetlights flickering as my father tried to figure out what the hell was wrong--I remember it all. I also recall a time, almost a decade later, following the last tests of my junior year in college, when I crawled into the aft end of a faded blue Volkswagen mini-bus and headed south from Portland, Oregon, to San Francisco with three or four other students. Exhausted after staying awake for most of three days straight (the consequence of my previous procrastination), I promptly conked out, raising my head again only 650 miles later, as we rattled over the Golden Gate Bridge. The day was bright and balmy and smelled of salt water. As Caen suggested, it was as close to heaven as I’d ever come.

I’ve been back to San Francisco many times since, and I was there again this last week, as the city commemorated the centennial of its disastrous 1906 earthquake and fire.

This ceremony, dedicated to the men and women who lost their homes and/or lives during the catastrophic happenings of April 18, 1906, has been held annually at Lotta’s Fountain on Market Street for more than 85 years. I’d participated in the 90th anniversary, as maybe 300 other people showed up to observe the official moment when the quake clobbered the city--5:12 a.m.--so thought I should be on hand for the more significant 100th. But I didn’t really know what to expect. Since the commemoration was scheduled to begin on Tuesday, at 4:30 a.m., I rose from my hotel room bed that morning at 3:00, showered, threw on some clothes, and commenced walking east along Geary Street, through the dark, heading toward the gold-painted, 131-year-old fountain, the landmark where so many bewildered and lost folks left notes, hoping to reconnect with their loved ones in the aftermath of the ’06 quake. I was a little surprised to see small clutches of others--not the sorts who would normally be up and strolling through downtown in the wee hours--heading in the same direction. However, the real shocker came when I stepped out into the broad concrete canyon that is Market Street. Arrayed along one side of Lotta’s Fountain were platforms on which sat TV cameras and enormous lights, and in the street were gathered perhaps 2,000 other people, some of them dressed in early 1900s period attire. (Local newspapers later reported that as many as 10,000 celebrants attended this event, some of whom had stayed up all night to be there on time.) It was only through sheer determination (and the employment of sharp elbows) that I managed to wend my way to within about 25 feet of the fount and its neighboring podium, where dignitaries would be speaking.

Amazingly, a dozen creaky survivors of the 1906 calamity were on hand to share their memories (with 22 reportedly having been invited), including 109-year-old Chrissie Mortensen, who told the rapt crowd, “I remember the smell of the smoke. I remember the cow running down California Street with its tail in the air.” Each of them was interviewed on stage by San Francisco Mayor Gavin Newsom, a charming first-term Democrat seemingly destined for higher office (Governor? President?). The 38-year-old Newsom gently, and with ready humor, escorted each of the elders through their often fading recollections of the 100-year-old events, teasing out tidbits from the men and women that contributed to that morning’s general air of respectful celebration. Then it was on to speeches by U.S. House Minority Leader Nancy Pelosi (whose 8th California congressional district covers most of the city) and the town’s police and fire chiefs, as well as longtime organizers of this annual occasion. (The Chronicle reported the next day that Governor Arnold Schwarzenegger, “who was in town to speak later Tuesday morning at an earthquake conference, declined to attend.” Probably because, as an often immoderate Republican, he’d have been booed in a metropolis so familiar for its Democratic leanings.) And before the sun could rise fully, a giant flowered wreath was hung on Lotta’s Fountain, to honor the 3,000 or more people who were killed during the earthquake and fire. The morning’s only glitch came when celebration organizers sought to lead the huge assembly in a painfully off-key rendition of the title song from the 1936 Clarke Gable/Jeanette Macdonald film San Francisco. Even many locals couldn’t remember the words (“San Francisco, open your golden gate/You let no stranger wait outside your door,” etc.) Too bad Tony Bennett didn’t accept the city’s proffered invitation to come belt out his signature song, “I Left My Heart in San Francisco,” for the assembled multitude.

Finally, beginning at 10 a.m., Market Street filled with the squeals and sirens of a parade. San Franciscans who’d balked at the notion of getting up for a predawn tribute seemed more than willing, hours afterward, to cheer passing bands, antique fire trucks, and marching union workers, 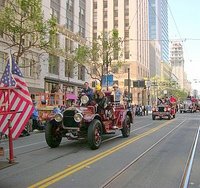 whether they did their clapping from the sidewalk or from the open windows of skyscrapers lining the procession route. There was nothing even remotely commercial about this affair--no floats sponsored by department stores, or balloons paid for by faceless corporate interests. Instead, the folks striding happily down the middle of Market were mostly inheritors of the occupations that had been instrumental in either combating the 1906 blaze or reconstructing the charred and crumbled city: plumbers, longshore workers, firefighters, and garbage collectors, along with thong-wearing Brazilian dancers and cheerleaders holding forth chapeaux to collect contributions for AIDS research. For a San Francisco exhibition, this one was remarkably short of both protestors in all flavors and cross-dressers in plumes and leather. But then, there were other things to rejoice in on this day than diversity and tolerance.

Few other towns in America have as good a time merely existing as San Francisco does. There’s a liveliness about this place that gold built and fire endeavored to destroy, that imperious newcomers and blindered moralists don’t understand, much less appreciate. Along with New Orleans, a city that is also struggling to rise from its ruins (the result of natural upheaval as well as governmental incompetence), Caen’s renowned “Baghdad by the Bay” has overcome, well, earth-shaking events to earn a second chance at prominence. Such a city assumes a level of self-confidence that is unavailable to urban centers that have never had to fight for their futures. It also inspires a distinctively fun-loving spirit, which was much in evidence as San Francisco remembered its greatly exaggerated death a century back. I believe it was the city’s director of emergency services who, in closing out her remarks last Tuesday morn, noted that there was ample reason--and opportunity--for folks to continue celebrating. “The bars open at 6 a.m.,” she observed, winning a hardy round of applause from the masses. Let’s hope our descendents will find that same spirit still in evidence when San Francisco celebrates the 200th anniversary of its great quake.
* * * 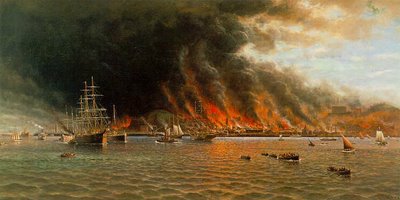 While I’m in the mood for travel commentary, let me recommend a wonderful but rather overlooked exhibit now on display at the San Francisco Maritime National Historical Park Visitor Center (499 Jefferson Street at the corner of Hyde Street), in the Fisherman’s Wharf area. Called “A Master’s Brush with the Sea,” it features the abundant artwork of William A. Coulter (1849-1936), an Irishman who arrived in the Bay Area in 1869 (the year the first transcontinental railroad was completed), and went on to become the waterfront artist for the San Francisco Call newspaper. Coulter produced what is perhaps the best recognized painting depicting the earthquake and fire of 1906 (see above). That dramatic image, created on a 5-foot-by-10-foot window shade the artist found in the still smoldering ruins of his city, and put together from scenes Coulter took in while riding the ferries back and forth to Oakland on April 18, 1906, is today “identified as the most accurate on-site, overall representation of California’s most famous disaster,” according to the historical park’s Web site. Standing in front of the painting, which was just being framed protectively when I saw it last week, you get a strong sense of the chaos and despair people must have felt fleeing from or merely watching the ’06 inferno. It reminds me of nothing so much as movie scenes of folks escaping the sinking Titanic in 1912, desperate to reach safety and sanity.

It would have been interesting to read what Coulter thought of the scene he reproduced so exquisitely; but I didn’t find anything at the exhibit recounting the artist’s specific recollections of that horrific day 100 years ago. There are, however, numerous ship portraits beyond this fiery panorama, including paintings of sailing craft entering or leaving San Francisco harbor, passing by prominent points in the Hawaiian Islands, and resting against the docks of London. People more knowledge about art than I am suggest that Coulter’s perspective can sometimes be a bit off, but the romantic scenes he presents make one forget about the technical aspects of his labors, and simply appreciate his canvases for the way they capture a period of nautical majesty long past.

I highly recommend that visitors to San Francisco between now and October 31, when the Coulter exhibit is set to close, stop by to see these paintings.

Check out our selection of some 400 works of mystery, crime, and thriller fiction—from both sides of the Atlantic—scheduled to reach bookstores between now and the beginning of June. Click here.