[[M I L E S T O N E S]] * I can’t let today pass without noting that it was on this date, 40 years ago, that the campy but beloved ABC-TV series Batman debuted, starring Adam West and Burt Ward. Although it was based on the comic-book character created by artist Bob Kane in 1939, 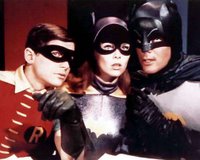 the half-hour series bore little of the darkness inherent in Kane’s work. Instead, it capitalized on action (lots of fight scenes with “KAPOW!” and “SOCK!” splashed across the small screen in vivid hues) and light romance (Batman seemed always on the edge of being seduced by that purr-fidious felon Catwoman, and Robin looked like a likely candidate for canoodling with Batgirl [played by the lovely Yvonne Craig]), as well as noteworthy guest appearances by Frank Gorshin (as The Riddler), Burgess Meredith (as The Penguin), Roddy McDowell (as The Bookworm), Cesar Romero (as The Joker), and numerous others. (Interestingly, as Wikipedia reports, so many Hollywood heavyweights were hungry for cameos or larger roles in the series, that some, like Elizabeth Taylor, had to be turned away.)

With its catchy, Nelson Riddle theme song (click here), cool Batmobile and gadget-packed Batcave, and two-part-episode cliffhangers, Batman became something of a TV legend, helping to inspire comic strips, books, cartoon shows, video games, theme park rides, and half a dozen theatrical movies (from a parodyish 1966 West-Ward spinoff from the series to last year’s Batman Begins). Given its impact on small-screen history, it’s stunning to remember that this series only lasted from 1966 to 1968 (showing twice a week during its first two seasons). In response to falling ratings, ABC eventually cut the series’ budget and even sought to eliminate the character of Robin, and turn the more adult-attracting Batgirl into the Caped Crusader’s sidekick. After West and series developer Wayne Dozier objected, the network decided to cancel the show. Rival NBC-TV subsequently proposed picking it up, and even returning it to a twice-weekly schedule, but withdrew its offer after learning that the show’s sets had been demolished.

With the Adventures of Superman now available on DVD, perhaps we can look forward to Batman finally being released in the same format. Stay tuned for more--same Bat-time, same Bat-channel.

Download "The Batman & Robin" series from the 60s by Nelson Riddle on: