I don’t think most readers of this blog, or any blog in fact, are likely to remember that today brings the 50th birthday of actress Bridget Fonda.

The daughter of performer Peter Fonda and the granddaughter of the great Henry Fonda, Bridget Jane Fonda took her first breaths in Los Angeles, California, on January 27, 1964. She went on to demonstrate early acting acumen in a school production of Harvey and, at age 5, did a turn as a hippie kid in her father’s 1969 film, Easy Rider. She subsequently studied method acting and scored her “first substantial film role” in the 1989 picture Scandal, co-starring with Joanne Whalley and John Hurt. As the years ticked by, Fonda added considerably to her résumé, portraying a journalist in The Godfather, Part III, a woman with a downright crazy roommate in Single White Female, a Seattle coffee-bar waitress in Singles, 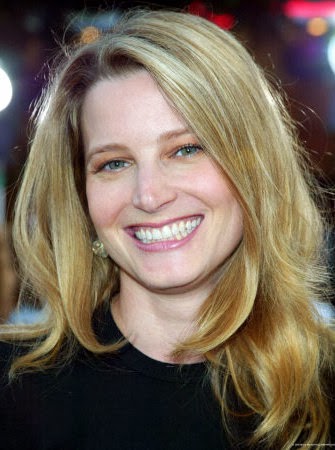 and a tragic assassin in Point of No Return--the film that really made me sit up and take notice of this young woman. (Yes, I’d previously seen Fonda play a spoiled small-town mayor’s daughter in Doc Hollywood, but hadn’t been blown away by her work in that one.)

After that, I started keeping a closer eye out for Bridget Fonda flicks, eventually taking in her efforts on The Road to Wellville, City Hall, Jackie Brown, A Simple Plan, and Lake Placid. I was particularly fond of her performance in 1994’s It Could Happen to You, in which she played a sweet, down-on-her-luck New York City waitress who, through an unlikely agreement with a good-hearted cop (played by Nicolas Cage, back when it seemed conceivable he might have a shot at a future in romantic comedies), became a millionaire. (You can see one of my favorite scenes from that movie by clicking here.) With her light-up-the-sky smile and sterling Hollywood pedigree, it sure looked as if Bridget Fonda had nowhere to go but up, right into the pantheon of Big Stars. Her face featured on the covers of such magazines as GQ and Self, she did guest spots on Late Night with David Letterman and other such programs, and as Wikipedia explains, Fonda was even “offered the lead role in the television series Ally McBeal (later played by Calista Flockhart), but turned it down to concentrate on her film career.”

However, in 2002, Fonda pretty much disappeared from the limelight. The Internet Movie Database (IMDb) last credits her as the star of Snow Queen, a Hallmark Entertainment picture for television. She was reportedly involved in a “serious car crash” in 2003, and then later that same year, she wed film and TV composer Danny Elfman (a close relative of actress Jenna Elfman). Their son, Oliver, was born in 2005.

Only rarely do you see photographs of Fonda anymore. For whatever reason, she vaulted off the trajectory of aging stardom before her 40th birthday. Yet a dozen years later, I still remember her fondly, even though--like Susan Saint James, Sherry Jackson, Diana Rigg, and other captivating actresses--she’s stuck in a time warp in my mind, never aging beyond the point at which she first made my heart race.

Wherever you are on this special day, Bridget Fonda, I hope you still have many reasons to smile.
Posted by J. Kingston Pierce at 9:01 PM

See our list of more than 320 crime and thriller novels due out on both sides of the Atlantic between now and April Fool’s Day. Click here.