Eat Your Heart Out, Captain Nemo 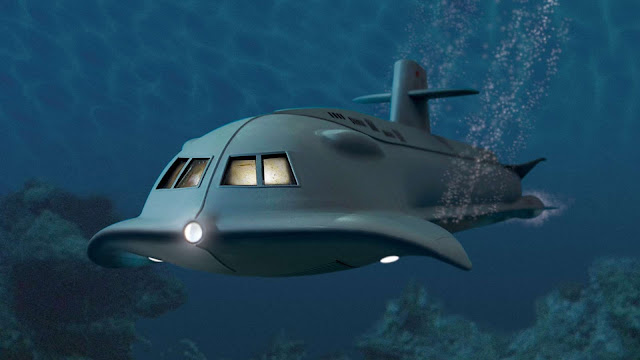 [[T U B E]] * Some of my previous posts have probably made this pretty clear, but if not, I shall state it unequivocally now: As a boy, I was a TV addict. If I had to trace the source of my fanaticism, it would probably lead back to my maternal grandfather, a wonderful and generous man who enjoyed sitting back in his overstuffed living-room chair each evening and spinning through the few network channels available to him in the 1960s and ’70s. He never failed to see an episode of Perry Mason, couldn’t get enough of The Ed Sullivan Show, and would even tune in Saturday night wrestling matches, which I never understood: Wasn’t it so obvious that the fighters were playacting?

By the time I was old enough to be left alone with the TV dial, I had my own favorite shows--a list not limited to Batman, Star Trek, The Time Tunnel, Lost in Space, Maverick, The Munsters, and Mission: Impossible. Later, I graduated to such classics as Alias Smith and Jones, Columbo, Baa Baa Black Sheep, M*A*S*H, McMillan & Wife, Kolchak: The Night Stalker, Room 222 (I fantasized about being taught by Karen Valentine), The Wild, Wild West, and of course, The Rockford Files (the best private-eye drama ever). In the decades since, I learned to live without access to those programs. But suddenly, thanks to DVD technology, many of them are slowly re-entering my life--often to the consternation of my wife, who somehow managed to avoid being so overcome as I was by the flickering flirtations of late-20th-century television. The list of programs being given a second life on disc was pretty pitiful at first. I mean, really, who couldn’t have survived without seeing The A-Team again? Or Starsky and Hutch? Or The Incredible Hulk? However, the selection has improved substantially. And according to TV Shows on DVD.com, it’s about to get even better, with 128 shows predicted to make the leap to disc for the first time ever in 2006. 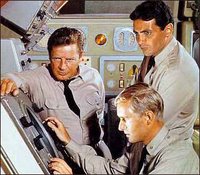 The best news might be that Voyage to the Bottom of the Sea, created by “Master of Disaster” Irwin Allen, and starring Richard Basehart and David Hedison, is scheduled to surface in late February 2006. Based on Allen’s 1961 movie of the same name (starring Walter Pigeon and Joan Fontaine), and with a cool theme orchestrated by Jerry Goldsmith (who went on to develop principal themes for Star Trek and the movie Chinatown), the hour-long ABC-TV Sunday adventure series--set supposedly in the far-off year of 1980--lasted for 110 episodes, from September 1964 to September 1968. Sure, it had its share of cheesy moments; I recall, for instance, a certain white, ape-like creature with horns that in one episode went berserk in the confined, hatchway-studded passageways of the submarine Seaview (pictured above). But for its era, Voyage was pretty terrific science fiction, with episodes that featured gargantuan, menacing sea creatures, time travel, alien visitations, death rays, stranded World War II combatants who didn’t know that the war was already over, and a “flying sub” that a boy my age then would’ve done almost anything to get aboard. The idea of a nuclear sub sailing all over the world, battling foes and rescuing international leaders (when its crew weren’t saving themselves, which seemed like a full-time job in itself) was not so dissimilar from Gene Roddenberry’s concept for Star Trek, which debuted two years after Voyage. (And, surely, it must have provided the inspiration for Steven Spielberg’s 1993-1996 TV series, Seaquest DSV.) While Roddenberry transported his tales far from Earth, into the unknown extremities of space, Allen sent the Seaview into the almost-as-unfathomable depths of the oceans that cover three quarters of Earth. An American population already awestruck by the televised wanderings of undersea explorer Jacques Cousteau was more than ready to go along.

I owned a Voyage to the Bottom of the Sea lunchbox. I owned a plastic replica of Seaview with which I could explore the mysterious corners of my bathtub. There wasn’t an episode of the series that, had I seen it four times already, wasn’t worth seeing a fifth. My mother used to roll her eyes whenever I’d bee-line it through the door of our house, headed straight for the television on a Saturday afternoon, just in time for another Voyage repeat. If there was a bigger Voyage to the Bottom of the Sea fan in Portland, Oregon, I never met him.

And now, through the modern marvel of DVD, I shall soon be able to travel back to the future once more with Admiral Harriman Nelson, Captain Lee Crane, Chief Francis Sharkey, and the rest of the Seaview crew. But season one of Voyage isn’t the only video treat expected to reach store shelves over the next year. Also look for Alien Nation, Get Smart, The Flash, The Flying Nun and Gidget, and Police Squad, as well as the aforementioned The Wild, Wild West and The Time Tunnel (another Irwin Allen production). Do you think it’s too early for me to begin making up my wish list for next Christmas?