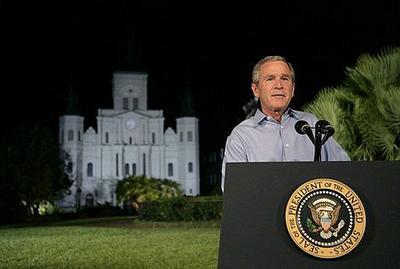 [[D I S A S T E R S]] * What, no little glasses and cigarette holder tightly clenched in a smile? George W. Bush last night substituted his affected Texas whine for Franklin D. Roosevelt’s patrician cadences, but he certainly seemed to be channeling the 20th century’s greatest president as he pledged to rebuild storm-thrashed New Orleans in “one of the largest reconstruction efforts the world has ever seen.” During his televised address from an unusually silent Jackson Square, at the heart of New Orleans’ French Quarter, the prez endorsed a specifics-free series of costly job-training and education programs for Hurricane Katrina evacuees, along with GOP-friendly tax incentives and loans for small businesses. And it wasn’t only Roosevelt from whom Bush borrowed. In a clumsy effort to associate himself with a better-liked Republican predecessor, Abraham Lincoln, who inked the original Homestead Act in 1862, Bush asked that Congress create a new Urban Homesteading Act, which would award federal property along the Gulf Coast to low-income residents, free of charge, provided that they build homes on the lots. In addition, he pledged that the U.S. government “will cover the great majority of the costs of repairing public infrastructure in the disaster zone, from roads and bridges to schools and water systems.”

Viewers who found themselves bewildered as to who exactly was offering such levels of government largesse weren’t alone. As Steve Benen of The Carpetbagger Report remarks, “Bush finally figured out how to get his presidency back on track--he’s decided to switch parties.”

This brief address was intended as the seminal event in a weeklong campaign to resuscitate “a presidency that is now at its lowest point ever, confronted by huge and simultaneous challenges at home and abroad--and facing a country divided along partisan and racial lines,” as The Washington Post’s Dan Balz puts it. Slate’s John Dickerson calls the speech Bush’s “second second inaugural address,” designed to overcome perceptions that Bush’s “second four years had been defined by impotency” on a wide range of fronts, from the ever-bloodier war in Iraq, to skyrocketing gasoline prices, to the remarkable failure of his chief legislative priority, Social Security “privatization.”

Yet the response to the prez’s workmanlike rhetoric could be described in the same way that commentators have characterized Bush’s own response to cries for help from survivors of the storm: too little, too late. Douglas Brinkley, a historian, and professor at the University of New Orleans, tells the Chicago Tribune: “History is sometimes the moment a bell rings. [Bush] had a historic opportunity to seize this and become a great leader and he bobbled it not just once but four or five times. This is a speech that needed to have been delivered within days of the hurricane.” Former presidential candidate Senator John Kerry (D-Massachusetts) agrees:

Leadership isn’t a speech or a toll-free number. Leadership is getting the job done. No American doubts that New Orleans will rise again, they doubt the competence and commitment of this administration. Americans want to know that their government will be there when it counts with leadership that keeps them safe, not speeches in the aftermath to explain away the inexcusable.

Most the nation’s largest newspapers seem to agree that the $200 billion or more it will take to put the Big Easy and the balance of the Gulf Coast back together again is being spent not simply because it’s the right and compassionate thing to do, or because “there is no way to imagine America without New Orleans,” as Bush remarked, but because the prez yearns to “restore his aura of leadership,” to quote the Los Angeles Times. “Hurricane Katrina struck at the core of Bush’s presidency,” the Post’s Balz writes, “by undermining the central assertion of his re-election campaign, that he was a strong and decisive leader who could keep the country safe in a crisis.” 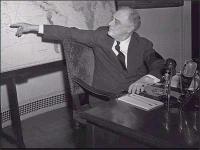 Because of the political costs involved here, GOP panjandrums have sought to voice support for Bush, even if they grouse behind closed doors at the exorbitant fiscal costs necessary to fulfill the prez’s undertakings. “He has to be a problem-solver,” former Reagan chief of staff Ken Duberstein tells the L.A. Times, “and if it requires money, you have to do it.” Newt Gingrich, the disgraced former speaker of the House, agrees. “Bush,” he insists, “can come down firmly on the side of bold dramatic change, in which case he will be in the Teddy Roosevelt tradition, or he can tolerate bureaucratic inadequacies and defend the indefensible, in which case the Democrats will win in 2006 and 2008.” Other members of Bush’s party, however, perhaps emboldened by their leader’s weakness across the polling spectrum, aren’t playing along. “I don’t believe that everything that should happen in Louisiana should be paid for by the rest of the country,” says U.S. Senator Tom Coburn (R-Oklahoma), a right-winger known best for doing crossword puzzles during the confirmation hearings for Supreme Court nominee John Roberts. “I believe there are certain responsibilities that are due the people of Louisiana.” Coburn, like other self-avowed fiscal conservatives in Congress, is hoping to offset storm rebuilding costs with cuts in “wasteful spending,” but finding it impossible. (Wasn’t it just the other day that House majority leader Tom DeLay declared--albeit it to a chorus of eye-rolling and generous guffaws--that Republicans already cut all the fat out of the federal budget?)

The challenge for Bush, according to the Chicago Tribune, will be to satisfy his Katrina critics, boost his poll standing, and “hold on to his core supporters, many of whom are strong fiscal conservatives who chafe at the notion of record deficits. The same supporters are not likely to want to give up hard-won tax cuts or sweeping changes in Social Security, both linchpins of the president’s pre-Katrina domestic agenda. Indeed, Bush may be about to find out if those supporters are loyal to him personally or to him merely so long as he is the vessel for their agenda.”

Yet how can a country that’s already mired in debt, caused by recession, Iraq war spending, and tax cuts for the wealthy (which the GOP still hopes to make permanent), possibly shoulder another $200 billion in expenses without some serious changes being made? David Sirota, a former spokesman for Democrats on the U.S. House Appropriations Committee, worries in the San Francisco Chronicle that “No political leaders are proposing rolling back tax cuts to pay Katrina’s $51 billion clean-up bill, and perhaps worse, no one is even making the case that the disaster along the Gulf Coast was aided and abetted by tax-cut zealotry.” (Bush has already ruled out tax hikes to fund this recovery effort, and the conservative Heritage Foundation is pushing for even more tax cuts in Katrina’s wake.) Concerning as well, intones New York Times columnist Paul Krugman, is the likelihood that federal spending on hurricane relief, combined with Bush’s antipathy toward independent oversight (evidenced most recently by his resistance to a bipartisan commission charged with investigating delinquent federal emergency-response efforts), “will be deeply marred by cronyism and corruption.” (The fact that Halliburton, Dick Cheney’s old firm--already charged with abuses in Iraq, including defrauding the U.S. military of more than $35 million in fuel costs--is angling for a bigger share of the Katrina cleanup, doesn’t bode well.) But of course, it will take five or more years for this project to be completed, and by then Dubya won’t be ensconced in the White House any longer. And in the meantime, he’s a master at promising things (full funding for No Child Left Behind Act, for instance) and then not actually delivering them, hoping that voters only remember his promise.

So it remains to be seen whether George W. Bush did himself any real favors last night. He may in fact have done himself some damage, not only with his base, but with the people he most needs right now: those who question his competence and command. His allusions to Katrina as part of a package with the Iraq war and 9/11 (“In a time of terror threats and weapons of mass destruction, the danger to our citizens reaches much wider than a fault line or a flood plain”), his failure--again--to ask any sort of sacrifice from Americans, and his blindness as to the value of the federal government (“It is now clear that a challenge on this scale requires greater federal authority, and a broader role for the armed forces--the institution of our government most capable of massive logistical operations on a moment’s notice.” Wasn’t that obvious after 9/11?) together confirm the portrait of an ideology-driven chief executive who’s out of touch, if not also out of time.

ADDENDUM: Several bloggers have remarked today on the fact that Bush appeared last night in shirt sleeves, rather than one of his customary (if ill-fitting) suits. Robert A. George from the Ragged Thots blog notes that the last president to deliver a major address in casual attire might have been Jimmy Carter, who gave his infamous 1979 “malaise speech” while wearing a sweater. “An uncomfortable comparison, to say the least,” George muses.