Meanwhile, Under the Press Radar ...

[[P O L L S]] * Fifty percent of Americans want Congress to impeach and remove George W. Bush from office if he lied about his reasons for taking the United States to war against Iraq in 2003, according to a new survey conducted by Ipsos Public Affairs. That’s a significantly higher proportion of Americans than the 26 percent who supported impeaching President Bill Clinton for lying about a personal affair back in 1998. 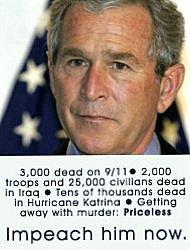 In this Ipsos study, commissioned by AfterDowningStreet.org, a group that endorses investigating Bush’s decision to invade Iraq, 44 percent of respondents disapproved of impeachment, and 6 percent said they didn’t know or wouldn’t answer. Support for impeachment was higher among Democrats (72 percent) and independents (56 percent), than among Republicans (20 percent). However, majorities favored impeachment not only in the Northeast (53 percent) and West (51 percent), but also in the more conservatives South (50 percent).

This is only the second national poll to ask whether Bush should be impeached if he deceived Americans into a bloody war to force regime change in Iraq, and it shows a shift in support for impeachment. A Zogby poll conducted last June found only 42 percent of respondents endorsing impeachment, with 50 percent opposing it. AfterDowningStreet.org explains that “Both the Ipsos and Zogby polls asked about support for impeachment if Bush lied about the reasons for war, rather than asking simply about support for impeachment. Pollsters predict that asking simply about impeachment without any context would produce a large number of ‘I don’t know’ responses. However, this may understate the percentage of Americans who favor Bush’s impeachment for other reasons, such as his slow response to Hurricane Katrina, his policy on torture, soaring gasoline prices, or other concerns.” An ABC/Washington Post poll from June already found 52 percent of Americans convinced that the prez “deliberately misled the public before the war,” while 57 percent said the White House had “intentionally exaggerated its evidence that pre-war Iraq possessed nuclear, chemical or biological weapons.”

Of course, the distance between public espousal of impeachment and Bush’s actual ousting from the Oval is very long indeed. That leap of opportunity will only be made if there is a greater accumulation of evidence against the prez--and probably a reduction in the number of congressional Republicans, as well.

* * *
“All in all, the framers [of the Constitution] would probably agree that it’s better to impeach too often than too seldom. If presidents can’t be virtuous, they should at least be nervous.” -- Conservative columnist Joseph Sobran
Posted by J. Kingston Pierce at 6:06 PM