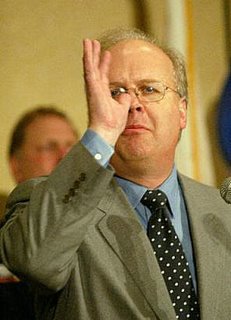 [[S C A N D A L S]] * Even as the American public insists that the CIA leak scandal is a serious blot on the nation’s history, Republicans are falling for their own propaganda about the insignificance of Scooter Libby’s indictment, the innocence of Karl Rove and Dick Cheney in “outing” covert agent Valerie Plame, and how special prosecutor Patrick J. Fitzgerald’s failure (at least so far) to enunciate a pattern of “wide-ranging criminal behavior” (quoth The New York Times’ David Brooks) restores the halo around the Bush White House. You can tell this, because the administration is now treating the whole sordid, potentially treasonous affair with the seriousness of a traffic infraction.

The Washington Post reports this morning that “President Bush has ordered White House staff to attend mandatory briefings beginning next week on ethical behavior and the handling of classified material after the indictment last week of a senior administration official in the CIA leak probe.” The paper goes on to explain:

According to a memo sent to aides yesterday, Bush expects all White House staff to adhere to the “spirit as well as the letter” of all ethics laws and rules. As a result, “the White House counsel’s office will conduct a series of presentations next week that will provide refresher lectures on general ethics rules, including the rules of governing the protection of classified information,” according to the memo, a copy of which was provided to The Washington Post by a senior White House aide.

The mandatory ethics primer is the first step Bush plans to take in coming weeks in response to the CIA leak probe that led to the indictment of I. Lewis “Scooter” Libby, Vice President Cheney’s former chief of staff, and which still threatens Karl Rove, the deputy White House chief of staff. Libby was indicted last week in connection with the two-year investigation. He resigned when the indictment was announced and on Thursday pleaded not guilty to charges of lying to federal investigators and a grand jury about his conversations with reporters.

Who are these people kidding? They think they can compel a few mid-level White House staffers to sit through hours of tedious lectures about how they’re really not supposed to lie, cheat, and steal (no matter what their superiors say), led by folks from the office of Bush’s failed Supreme Court nominee, and the country will start believing again the prez’s thoroughly broken promise to “restore honor and decency to the Oval Office”? Once more, I ask: How stupid do Republicans think we are? This is the administration, you’ll remember, that gave us David H. Safavian, the chief procurement officer in the White House Office of Management and Budget, who was arrested in early September on charges that he had lied and obstructed a criminal probe into Republican lobbyist Jack Abramoff’s dealings with the federal government. The same administration that installed Kenneth Tomlinson, a former editor of the conservative Reader’s Digest (and Rove friend), as chairman of the board at the Corporation for Public Broadcasting, only to see him ousted in anticipation of an inspector general’s report questioning his use of federal funds and his campaign to “correct” what he perceives as PBS’s “liberal slant.” And the same administration that once promised, “If anyone in this administration was involved in [leaking Plame’s identity to the media], they would no longer be in this administration,” only to have Bush subsequently flip-flop and tell reporters that he wouldn’t fire the leaker unless there was actually a crime committed. It was this administration, too, that hyped intelligence about Saddam Hussein’s supposed weapons of mass destruction and Iraq’s training of Al Qaeda members in order to propel the United States into a “pre-emptive” war against Iraq--one that has now led to the deaths of more than 2,000 American troops and contributed to record national budget deficits.

People who drive recklessly down the freeway or endanger pedestrians at stoplights may be forced to attend safe-driving courses. Those who, for political reasons, leak the identities of covert agents, bilk the government treasury, and mislead the nation into war ought not be let off with punishments no more severe than “mandatory briefings ... on ethical behavior.”

And the insult is not just that officials in the Bush White House are arrogant enough to purvey falsehoods right and left; it’s that they’re convinced they can get away with their lies, that Americans are too ignorant to notice, or to care. If anyone in this corrupt administration is due for some serious ethics training, it’s the guys at the top, George W. Bush and Dick Cheney, neither of whom is expected to attend next week’s ethics classes.

ADDENDUM I: As John Heilemann writes in the latest New York magazine, “From the moment Bush took office, it’s been apparent to anyone with eyes to see that Cheney is the prime mover behind this administration. From his quarters in the Old Executive Office Building, surrounded by a coterie of neoconnish staffers, Libby the most powerful among them, Cheney has emerged as the most influential vice-president the country has ever seen--or, more accurately, not seen. Largely invisible to the public, he has been the untouchable man, immune to criticism, genuflected before by every corner of the Establishment. Until now, that is. Fashionable opinion has it that the Bush administration is basically over. But while that conclusion may prove premature, I suspect that what we’re witnessing today is the end of the Cheney Era.” Read on.

ADDENDUM II: The Washington Post looks ahead to how the Plamegate scandal and polls showing the majority of Americans saying that the country is headed in the wrong direction might affect the 2006 midterm elections. “One year before the 2006 midterm elections, Republicans are facing the most adverse political conditions of the 11 years since they vaulted to power in Congress in 1994. Powerful currents of voter unrest--including unhappiness over the war in Iraq and dissatisfaction with the leadership of President Bush--have undermined confidence in government and are stirring fears among GOP candidates of a backlash.” Read on.

READ MORE: “Telling Secrets: How a Leak Became a Scandal,” by Nicholas Lemann (The New Yorker); “Democrats: Deceit Made Us Back War,” by Dick Polman (The Philadelphia Inquirer); “Squeezing Bush on His Prewar WMD Hype,” by David Corn (The Nation); “A Cheney-Libby Conspiracy, Or Worse? Reading Between the Lines of the Libby Indictment,” by John W. Dean (FindLaw’s Writ); “A White House Without Rove?” by Mike Allen (Time); “The Inescapable Need for Congressional Hearings,” by Steve Benen (The Carpetbagger Report); “The Bush Administration--Drifting and Drifting,” by Bob Burnett (The Huffington Post); “New Poll: Majority of Americans Support Impeachment,” by David Swanson (AfterDowningStreet.org); “Carter: Americans Were Misled on War” (CNN); “GOP Leaders to Bush: ‘Your Presidency Is Effectively Over,” by Doug Thompson (Capitol Hill Blue); “World According to George W. Gump,” by Phillip Adams (The Australian); “The Silence on Iraq Is Deafening,” by Russ Feingold (Salon); “The Mysterious Death of Pat Tillman,” by Frank Rich (The New York Times); “Legislation Killed By GOP Senate Defines Republicans,” by Bob Geiger (Yellow Dog Blog).
Posted by J. Kingston Pierce at 11:38 AM

Check out our selection of more than 350 works of mystery, crime, and thriller fiction—from both sides of the Atlantic—scheduled to reach bookstores between now and the beginning of June. Click here.