Uh, Who Did You Say Is At Fault Here? 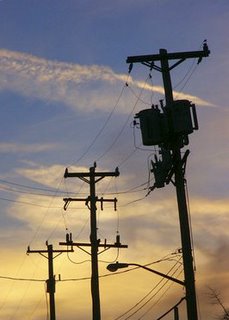 [[S C A N D A L S]] * Unbelievable. The U.S. Justice Department announced today that it’s opening a criminal investigation meant to determine who leaked the information that George W. Bush authorized warrantless, probably illegal, and potentially unconstitutional eavesdropping of people in the United States. Now, don’t misread that sentence. I didn’t write that the politically minded folks at Justice were going to look into the eavesdropping itself (as Senate Judiciary Committee chairman Arlen Specter [R-Pennsylvania] has, to his credit, already promised to do on Capitol Hill); no, this probe is instead meant to root out and prosecute whoever blew the whistle on Bush’s expansion of executive powers and possible violation of civil rights. From the administration’s viewpoint, this investigation apparently makes sense, as it dovetails nicely with the prez’s contention, made during a televised White House press conference last week, that revealing his super-secret surveillance program “was a shameful act ... in a time of war. The fact that we’re discussing this program is helping the enemy.” However, those of us who have watched this administration’s repeated efforts over the years to shift responsibility for wrongdoing and blunders onto the shoulders of others, would certainly be within our rights to ask, as AMERICAblog’s John Aravosis did today, “if leaking classified info is such a big deal, then when is Karl Rove being fired? ... Or is it only a crime to leak classified information when said information proves that Bush is committing a felony?”

Only the most partisan Bush defender (a shrinking group, indeed) would see this move as anything better than a lightly veiled attempt by the Republican administration to scare the American media away from questioning its activities, no matter how dubious. It’s evidently also an effort to intimidate The New York Times, a favorite conservative target and, until the last few months, it seems, a newspaper willing to hold its tongue and nose while Bush promoted his agenda of deficit-exploding budgets and undermining institutions (such as Social Security) that challenged the GOP’s every-man-for-himself ethos. The Times even held the domestic spying story for a year, at the prez’s request. Now, the Justice Department appears intent on prosecuting the paper for leaking classified information--even though, or maybe because, its disclosures exposed the extent to which this White House has been willing to ignore precedent and the rule of law, supposedly in the cause of fighting an increasingly murky “war on terror.”

Expect to see more Times reporters marched into court on the arms of their lawyers (though among them this time won’t be Judith Miller, the controversial reporter who left the “paper of record” after giving testimony in the case that led to vice-presidential chief of staff I. Lewis “Scooter” Libby’s indictment). Also expect more tension between Congress and the White House, as Bush again whips out the argument--used successfully in avoiding too many questions about Karl Rove’s culpability in the CIA leak scandal--that he cannot possibly cooperate in congressional hearings on Snoopgate or answer reporters’ repeated queries about this latest shame inflicted upon the Oval Office so long as there’s an active investigation underway. We might even see his fellow Republicans blow a vein or two as they grapple with the prez’s obfuscatory contention that talking about the authority he gave the National Security Agency (NSA) to monitor phone calls and e-mail communications without showing probable cause or securing warrants would mean violating state secrets and giving aid to “the enemy.”

And we can look forward, of course, to myriad counterattacks by the administration and its water-carriers. “Inevitably,” writes Steve Benen in The Carpetbagger Report, “the right’s talking points will tell us that the administration’s critics are hypocrites. We wanted the Justice Department to probe the Plame leak, they’ll say, but not the ‘Snoopgate’ leak. But if Bush’s political allies can’t see the difference between exposing official wrongdoing and exposing a CIA agent to help cover up bogus pre-war claims, there’s just no hope for them.”

The best we can hope for is that the American news media aren’t easily cowed by Bush’s campaign to demonize whoever leaked the information about his domestic spying program, and that they don’t let the prez slide for violating the law when he ordered the NSA to eavesdrop on U.S. residents allegedly suspected of terrorist ties. As Salon’s War Room blog remarked, in distinguishing the Snoopgate leak from those that led to revelations of a CIA agent’s identity:

Though Bush has called the leak of details of the NSA program “shameful,” this leak was morally and ethically quite different from the leak of Valerie Plame’s identity. In that case, someone in the Bush Administration was talking to reporters about Plame and her husband, Joe Wilson, in an effort to damage them; it was a scurrilous act, and the journalists who dealt with those officials weren’t very easy to defend.

The eavesdropping leak, though, was just the opposite: The leakers here were disclosing something of vital interest to Americans. The journalists here were trying to get that story to the public. The real story here doesn’t have to do with the press, or with the whistleblowers--the real story is the Bush plan to wiretap Americans without legal oversight. As we go down the rabbit hole of another leak investigation, let’s keep that in mind.

Like Daniel Ellsberg, the former military analyst who, in 1971, provided The New York Times with the Pentagon Papers, a top-secret and damaging history of U.S. political and military involvement in the Vietnam War, the person or persons responsible for leaking news of Bush’s domestic eavesdropping to the Times is a hero and a patriot, not a villain. No matter what those FOX News blowhards or Bush say to the contrary.

SURPRISE, SURPRISE: From a story in The New York Times comes this tidbit:

Though Mr. Bush avoided the subject in his radio address, some of his advisers and national security officials say the White House has decided in the past two weeks to take a hard line with Congressional inquiries into Mr. Bush’s secret authorization of wiretaps without warrants on suspects within the United States.

The White House’s effort to deflect a Congressional investigation into a secret executive order he issued in 2002 authorizing domestic spying follows a strategy Mr. Bush tried--and ultimately retreated from--in the controversies over why he claimed Saddam Hussein was seeking uranium in Africa and what kind of warnings the White House received about Al Qaeda’s ambitions before the Sept. 11 attacks. Mr. Bush’s aides and intelligence officials say they plan to refuse to offer more details in public on why they believe the technology of the program made it necessary to bypass the secret court designed to authorize wiretapping efforts inside the United States. They are preparing to dispute vigorously and quite publicly the broader legal critique, offered by some Democrats, the American Civil Liberties Union and some Republicans, that the president acted beyond his authority as commander in chief.

“We’re not going to shy away from this debate,” Mr. Bush’s counselor, Dan Bartlett, said on Friday from Washington.

THE PREZ’S ANNUS HORRIBILIS: Recapping America’s last tumultuous year in politics, Salon columnist Sidney Blumenthal writes: “In his second inaugural address, George W. Bush four times summoned the image of fire--‘a day of fire,’ ‘we have lit a fire,’ ‘fire in the minds of men,’ and ‘untamed fire.’ Over the course of the first year of his second term, all four of the ancient Greek elements have wreaked havoc: the fire of war and ‘fire in the minds of men’ of culture war, the air and water of Hurricane Katrina, whirlwinds raging across the earth from Iraq to Florida, from Louisiana to Washington. Through obsession or obliviousness, rigidity or laziness, Bush got himself singed, tossed about, engulfed, and nearly buried.” Read on.

So many more of the American community, both republican and democrat should be sorely concerned over the fact that after the government prosecutes the "Times" reporters (they may very well be the last to report the way they did)we will have lost our only window into what the government does and how they do it. Right now, RIGHT NOW!! There is no freedom of the press. The government is showing us all that we DO NOT have the right to freedoms that have kept us free for so long.