Yesterday added a sad but necessary event to America’s timeline: the impeachment of Donald John Trump. Sad, because the office of the U.S. president is traditionally due respect, but Trump’s corrupt and unconstitutional efforts to pressure a foreign country (Ukraine) to interfere in the 2020 presidential campaign for his personal gain, and then his going to extraordinary lengths to cover up that perfidy, brings shame upon the office. 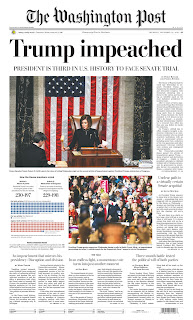 Necessary, because as House Judiciary Committee Chairman Jerry Nadler (D-New York) put it, “We cannot rely on the next election as a remedy for presidential misconduct when the president threatens the very integrity of that election. He has shown us he will continue to put his selfish interests above the good of the country. We must act without delay.”

I didn’t vote for Republican Trump in 2016, and I never shall; I don’t believe he’s fit, either emotionally or intellectually, to fill the position he holds. What I have learned about him over the last few years—that he’s a bigot, a misogynist, a narcissist, and a serial sex abuser; that he cheats on his wives and demands loyalty from others, but will turn on anyone 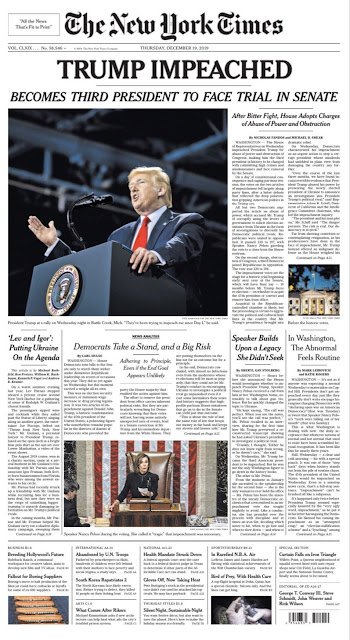 when the going gets tough; that he’s a braggart and a bully, a whiner and a con man; that he’s petty and paranoia, driven by grievance and a sucker for conspiracy theories; that he’s a habitual liar—none of those characteristics commends him as a leader or a role model, or even as a man.

Trump’s mendacity is particularly pernicious. It drew special attention earlier this week, when The Washington Post counted the lies he’s told over the last three years, and came up with 7,688. One of those became Politifact’s 2019 Lie of the Year: his assertion that the still-anonymous whistle-blower who first drew public attention to Trump’s Ukraine scandal was “almost completely wrong.” A more honorable, more thoughtful, and more experienced president would not be due such denunciations.