The Sound of One Head Rolling 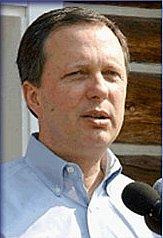 [[P O L I T I C S]] * Well, it’s about damn time. The Associated Press reports that Michael D. Brown, chief of the Federal Emergency Management Agency (FEMA), and the focus of anger and frustration over the Bush administration’s ham-fisted response to Hurricane Katrina, is being relieved of his responsibilities for managing hurricane relief efforts along the Gulf Coast. The story explains that Brown is being sent back to Washington, D.C. (though it fails to mention exactly where his tail is presently located) and that he’ll be replaced by Vice Admiral Thad W. Allen, the Coast Guard’s chief of staff, who was already overseeing New Orleans relief and rescue efforts.

What I want to know, though, is: What finally convinced George W. Bush to take this obvious hack off the job?

Was it the news storm that broke last week around revelations that Brown got his FEMA post because of outright cronyism (he’s an old friend of Bush’s first FEMA director, Joe Allbaugh), and that he had previously spent a decade as a commissioner with the Colorado-based International Arabian Horse Association--a post from which he either resigned or was fired?

Was it questions raised by Time magazine about this bureaucrat’s résumé fudging? It appears that Brown’s bio on the FEMA Web site calls him a former Edmond, Oklahoma, “assistant city manager with emergency services oversight,” when in fact he was an intern. And he’s previously listed himself as an “Outstanding Political Science Professor” at Oklahoma’s Central State University, when in fact he was only a student there.

Was it because of his widely panned national TV performance on the night of September 1, when he admitted (as Homeland Security Secretary Michael Chertoff had, in fact, already done on the radio) that “the federal government did not even know” there were 25,000 evacuees trapped in the New Orleans convention center until hours after the media had alerted the rest of the country?

Was Bush moved to neuter “Brownie”--the same guy he’d praised on September 2 for “doing a heck of a job”--only because an internal memo was later leaked, revealing that the FEMA honcho had taken “roughly five hours” following the hurricane’s deadly strike on August 29 before even asking that 1,000 workers from the Department of Homeland Security be sent to support rescue forces in the Gulf region?

Was it The Washington Post’s front-page report today that “Five of eight top Federal Emergency Management Agency officials came to their posts with virtually no experience in handling disasters”? (Not that such credentials are required anymore; the Chicago Tribune quotes a FEMA spokesperson as saying that, under Bush, “the ability to keep the organization running” is more important than direct experience in handling emergencies.)

The prez can’t reasonably repeat his father’s excuse about being “out of the loop” when it comes to the manifest inadequacy of his FEMA bureaucrats; Bush the Younger deliberately turned a federal agency that under President Bill Clinton was considered a model of order and efficiency, back into the dumping ground for inexperienced political contributors that it had been under Ronald Reagan and George H.W. Bush. It was only a matter of time before something went wrong, and Michael Brown’s obvious unpreparedness was revealed. Slate, only this morning, mused that the only reason the FEMA chief hadn’t been sacked already, was because he had become a useful “fall guy” for a prez who’s congenitally incapable of admitting to error himself.

Brown seems to be having some difficulty, too, conceding that this demotion was his own fault. Asked by the Associated Press whether he was “being made a scapegoat for a federal relief effort that has drawn widespread and sharp criticism,” Brown said, “By the press, yes. By the president, no.”

It’s that latter statement onto which the head of FEMA’s “confederacy of dunces” is now holding like a drowning man. After all, Brown’s removal from hurricane duties doesn’t mean he’s actually been fired, just that he’s been stuck on a shelf for the time being. And he knows, as do most political watchers, how hard it is for the loyalty-loving Bush to can anyone. Despite talk of his being a “CEO president,” Bush’s backbone goes all Jello-y when it comes to dismissing people who’ve become obvious political millstones. After all, to fire someone means you have to acknowledge that you made a mistake hiring them in the first place--and Bush doesn’t admit to making mistakes. Former Treasury Secretary Paul O’Neill may be the only administration member of any significance to have been ousted since Bush moved his cowboy boots into the White House--and that was only after the very broadest West Wing hints that he wasn’t singing sufficiently from the administration’s carefully edited hymnbook. Bush’s resistance to handing Brown a pink slip and ushering him out the door only reinforces the truth about that promotion being the result of political patronage.

How much longer Brown can hope to draw a federal paycheck may depend on whether his “reassignment” silences the baying press. It may also depend, as Salon’s War Room says, on whether the press shifts its focus of criticism “up the ladder to Chertoff and the president himself.” Bush may need Brown around as a fall guy for a while longer.

Could it be that the White House wants to avoid a vacancy at FEMA? If they leave it unfilled, its politically unacceptable. If they try to fill it with an “acting” appointment, they would have to legally pull from the management team already at FEMA, and they all have been exposed as political hires as well. If they go outside and get someone qualified, then they will have to have a confirmation hearing that would expose, debate and otherwise criticize the previous director.

They may be stuck. So, send him back to D.C. with the title, for now at least. By not firing Brown, they avoid having to answer the question: so who is the FEMA Director?

ADDENDUM I: Boy, you could see this one coming from an ocean away, couldn’t you? Hoping to dig himself out from under disastrous job approval ratings, Bush today linked hurricane recovery with the aftermath of the September 11, 2001, terrorist attacks, declaring that the United States is prepared to “overcome any challenge.” Considering how dismally his administration has handled the post-Katrina situation, you’d think that the prez might tone down his self-aggrandizement. But no, this looks to be the initial step in a Roveian plan to connect storm recovery with the “war on terror,” and hope that Americans can be convinced--against their better judgment--to salute Bush for his “leadership.” Expect to hear more such B.S. this coming Sunday, as the nation’s capital “celebrates” the fourth anniversary of the 9/11 attacks with a cheesy “Freedom Walk” and country-music concert.

ADDENDUM II: I haven’t decided yet which of these two quotes deserves the Insensitive Statement of the Day Award, but one of them surely must. U.S. Representative Richard Baker (R-Louisiana) was overheard telling lobbyists, “We finally cleaned up public housing in New Orleans. We couldn’t do it, but God did.” Meanwhile, House Majority Leader Tom DeLay (R-Texas), while paying a media-attended visit to the Houston Astrodome, stopped to chat with a trio of boys resting on cots. After comparing their situation with being at camp, he asked, “Now tell me the truth boys, is this kind of fun?”