Time to Pass Around the Pink Slips 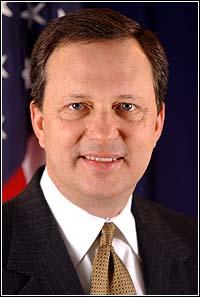 [[P O L I T I C S]] * “Brownie, you’re doing a heck of a job,” George W. Bush enthused last Thursday as he finally arrived in Alabama to begin surveying the damage wrought by Hurricane Katrina three days before. His words of praise were directed at Michael D. Brown, the Oklahoman he’d tapped in 2003 to head up the Federal Emergency Management Agency (FEMA)--the same political appointee who has now become a principal focus of the anger directed at the Bush administration for its lackadaisical response to this storm’s devastation and human displacement, and whose very credentials for his post are being called into question.

As the Boston Herald reported on Saturday, and as other papers are making still clearer in stories published today, Brown’s background as a lawyer, a failed Republican congressional candidate, and an “abrasive” commissioner with the International Arabian Horse Association (IAHA), a Colorado-based breeders’ and horse-show organization, hardly prepared him for the extraordinary challenges of dealing with a flooded New Orleans, a largely decimated Gulf Coast, and tens of thousands of stranded evacuees. However, Brown had an all-important job-seeking “in” with the Bush White House: he was an old Oklahoma college friend of Joe M. Allbaugh, Bush’s former gubernatorial chief of staff and national campaign manager during the 2000 presidential contest, who became the prez’s first FEMA director. “Brown told several horse association officials that if Bush were elected, he’d be in line for a good job,” The Denver Post relates. And sure enough, when Allbaugh took control of FEMA in 2001, he brought Brown with him to become the agency’s deputy director and general counsel.

That appointment rescued Brown from what’s been described as an uneasy tenure with the now-defunct IAHA. He’d joined the Arabian horse organization as judges and stewards commissioner in the early 1990s, after running unsuccessfully in 1988 to unseat Democratic congressman Glenn English of Oklahoma. Knight-Ridder explains that Brown’s role with the IAHA “was to ensure horse-show judges followed the rules and to investigate allegations against those suspected of cheating.” Drawing a $100,000-a-year salary, he was known as “The Czar,” because of the “breadth of his power and the enthusiasm with which he wielded it,” according to Mary Anne Grimmell, a former IAHA president. But, the Boston Herald says, Brown was eventually “forced out of the position after a spate of lawsuits over alleged supervision failures.” The Denver Post cites an association board member, Karl V. Hart of Florida, who says that “in 2000 Brown improperly accepted a check for nearly $50,000 from a prominent breeder and put it toward his own legal defense for his work as commissioner. Board members thought this was improper because Brown already had protection, from the association’s legal team. ... Because of the money dispute, Brown was asked to resign”--though no such controversies are hinted at in the 2001 press release announcing his FEMA nomination. (Others have said that the money dispute was merely a “misunderstanding,” and not the cause of Brown’s separation from the IAHA.)

These questions might not have arisen, had it not been for Brown’s seeming incompetence regarding the handling of New Orleans rescue efforts and what that beleaguered city’s Times-Picayune newspaper terms his “bald-faced lies.” Chief among those deceptions, the paper charges, is Brown’s televised “confession” last Thursday night that his agency was unaware that as many as 15,000 “storm victims were stranded at the Ernest N. Morial Convention Center” without food or water, and therefore could not be more promptly assisted. “Lies don’t get more bald-faced than that,” the Times-Picayune said in a Sunday editorial that called on Bush to fire “every official at the Federal Emergency Management Agency ..., Director Michael Brown especially.” (Maureen Dowd of The New York Times was even more blunt in a Saturday column that called Brown “the blithering idiot in charge of FEMA” and expressed amazement that he hadn’t been discharged immediately from his position.) U.S. Representative Bennie Thompson of Mississippi, the top Democrat on the House Homeland Security Committee, had already demanded that the prez dismiss either Brown or Homeland Security Secretary Michael Chertoff, or both. And U.S. Senator Mary Landrieu of Louisiana is pushing for the appointment of “a Cabinet-level official to oversee Hurricane Katrina relief and recovery efforts” and take the task out of Brown’s hands. Democrats as well as Republicans are calling for hearings into what went wrong with the federal response to Hurricane Katrina, and where Brown fell down on the task.

Meanwhile, U.S. Representative Mark Foley (R-Florida) says he’s going to introduce legislation this next week calling for FEMA--the role of which was significantly downgraded when it became part of the Department of Homeland Security--to be given a separate identity once again.

Responding to inquiries about whether Brown would be sacked, Chertoff says, “I do have confidence in the FEMA director, and I have confidence in the people who are working tirelessly for him.” But, of course, confidence expressed by government officials frequently precedes backdoor efforts to oust those same bureaucrats. Bush, who for some reason touts his management skills, has become notorious for letting his loyalty blind him to the need to dismiss White House officials (Paul O’Neill, Donald Rumsfeld, and Karl Rove among them) who’ve become political liabilities or have proven their inadequacy to the jobs into which they were installed. Much may depend, though, on how seriously the already weakened Bush is hurt by his abject failure to respond quickly to Hurricane Katrina. The Boston Herald quotes Ronald Heifetz, from the Center for Public Leadership at Harvard University’s John F. Kennedy School of Government, as saying that Bush “has suffered irreparable damage” as a result of this mess. “I think that this will be a significant stain on his image as a crisis leader.” (An understatement, to be sure.)

But the even greater disappointments caused by FEMA’s stumbles over the last week might have been expected, opines Jerome M. Hauer, a former top emergency management official for New York City and the Department of Health and Human Services. “Every time we have had a FEMA director who has come out of a political environment rather than an emergency environment, FEMA has struggled,” he told The New York Times. The extent of Brown’s ineptitude is all the more astonishing, when compared with James Lee Witt’s service during the Clinton administration. Witt, who’d previously commanded the Arkansas Office of Emergency Services, was the first professional emergency manager ever put in charge of FEMA. Clinton not only awarded him Cabinet-level status, but “kept Witt busy,” Bruce Reed recalls in Slate: “In eight years, he declared a record 348 disasters. As they proved in Oklahoma City and countless other occasions, Clinton and Witt understood that if there’s ever a time people need a federal government and a President, it’s in times of disaster.” Even Bush acknowledged Witt’s “really good job” during the 2000 U.S. presidential debates.

Reed concludes that Witt is “the Clinton man Bush should have kept.” Maybe the prez can make up now for his earlier mistake in releasing Witt, by appointing him as administrator of hurricane-relief operations in the Gulf--a position for which he is exceedingly better qualified than either former New York mayor Rudy Giuliani or ex-Secretary of State Colin Powell, both of whom have been mentioned by Republicans as candidates for that job.

UPDATE: Although Bush still hasn’t sought Witt’s wisdom in handling the Gulf Coast debacle, Louisiana Governor Kathleen Blanco has. According to the Times-Picayune, she has hired him “as a special adviser to help her manage the recovery and restoration efforts in the wake of Hurricane Katrina.” Smart move. At least somebody’s thinking like a leader.

ADDENDUM: I noted a couple of days ago that Dick Cheney was still enjoying his summer holiday in Wyoming, while his boss was trying to put the best face on the White House’s post-Katrina fiascos. But the veep seems finally to have returned to Washington. Salon observes that Cheney was on hand Saturday morning for Bush’s weekly radio broadcast--in this odd case, from the White House Rose Garden.
Posted by J. Kingston Pierce at 5:06 PM