The Girl from “Guy”

How is it possible that today could mark the 50th birthday of onetime poster babe Heather Thomas? You remember her, right? In her mid-20s, she spent almost 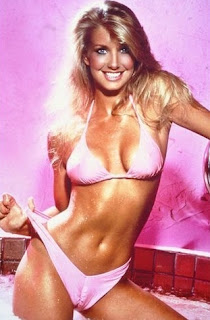 as much time strutting about in bikinis on the 1981-1986 ABC-TV series The Fall Guy as she did helping Hollywood stuntman-bounty hunter Colt Seavers (Lee Majors) round up bail-jumpers and other lawbreakers.

Back then, the number of Heather Thomas photos taped inside boys’ high-school lockers might have exceeded even the quantity of Ray-Bans and Rubik’s Cubes being sold in the United States. I have no statistics to back this up, but my guess would be that only the famous pin-up of the Charlie’s Angels star then known as Farrah Fawcett-Majors provoked more male salivation than Thomas did at the time.

This Connecticut-born, California-reared actress, who in the era of The Fall Guy boasted all the appeal of a blond, tomboyish, small-town girl unselfconscious of her own beauty, looked to have fame within her grasp. After attending the University of Southern California’s Film School, Thomas scored roles in the eminently forgettable series David Cassidy: Man Undercover and B.J. and the Bear before being signed to play “Jody Banks” on The Fall Guy. In 1982, Us Weekly chose her as its “Favorite Female Newcomer.” Unfortunately, the Majors series, with its country-ish theme song, typecast Thomas for parts that emphasized her sex-symbol looks, rather than her acting chops. “There’s obligatory condescension that goes with that,” she told People magazine back in 2003. “You fill that archetype--the blonde bimbo. But at that point, I was just having fun.” She guested on The Love Boat, T.J. Hooker, Mickey Spillane’s Mike Hammer, and the somewhat less than award-winning 1990 series Swamp Thing.

After The Fall Guy’s five-year run, recalls one Web bio, Thomas found several roles in TV movies. She “co-starred with Cliff Robertson and Hope Lange in Ford: The Man and the Machine (1987), a biopic about the renowned manager who revolutionized the industry. Her fine acting in the telepic brought Thomas a Gemini nomination for Best Performance by a Supporting Actress. She then was cast as Marilyn Monroe in a Kennedy-themed movie called Hoover vs. the Kennedys: The Second Civil War (1987), had a feature role as Lt. Carol Campbell

However, she also battled drug problems. In 1984, says TV.com, Thomas “entered rehab for cocaine addiction. She blames a Hollywood lifestyle. After exiting rehab, she continued acting, but started writing scripts. She penned more than 40 scripts, before selling one in 1997.” That story carried the unpromising title School Slut, says People, and focused on “two high school girls, one an outsider, one a beauty queen, who feel ostracized and ‘decide to work outside the paradigm.’” Despite Thomas’ enthusiasm, no movie of her work was ever made.

Married since 1991 to an entertainment attorney, Thomas divides her time these days between Santa Monica, California, and Jackson Hole, Wyoming. She has a couple of stepdaughters and one child of her own, India Rose, who was born on June 19, 2000. According to the Internet Movie Database, her last acting part was as an unnamed showgirl in the 1998 Billy Crystal film My Giant.

The fact that Heather Thomas, a fantasy babe from my youth, will today blow out 50 candles on a birthday cake makes me feel awfully damn old. It’s almost enough to send me out to buy The Fall Guy: The Complete First Season, which was released a couple of months ago on DVD, if only so that I can once more appreciate the sight of Thomas sashaying through a pair of swinging bar doors, and cocking her bikini’ed left hip, as she did in the main title sequence of that series. Be still my aging heart.

Check out our selection of more than 350 works of mystery, crime, and thriller fiction—from both sides of the Atlantic—scheduled to reach bookstores between now and the beginning of June. Click here.